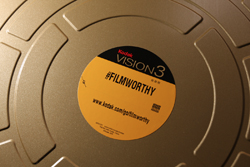 On Monday, Kodak launched a new initiatve to support independent filmmakers choosing to shoot on film: Kodak’s Independent Production Package. Currently only available in the UK, Kodak have designed a combined service providing stock, development, camera equipment and transfer services. The packages, available on 16mm and 35mm, are tailored to the filmmaker’s needs and run in association with Cinelab London, ARRI Rental, Panavision, Movietech and Take Two Films, amongst others, and will be priced at a complete per foot rate. The aim is to simplify the process for filmmakers and to make budgeting easier and more transparent.

Sam Clarke, Kodak’s origination manager says that the companies that they are working with ‘understand the challenges independent productions face, and the program exists because we all want to see filmmakers realize their vision.’ Kodak hopes to extend the package to other countries soon.